A minute later: Marijan – Inside the hall 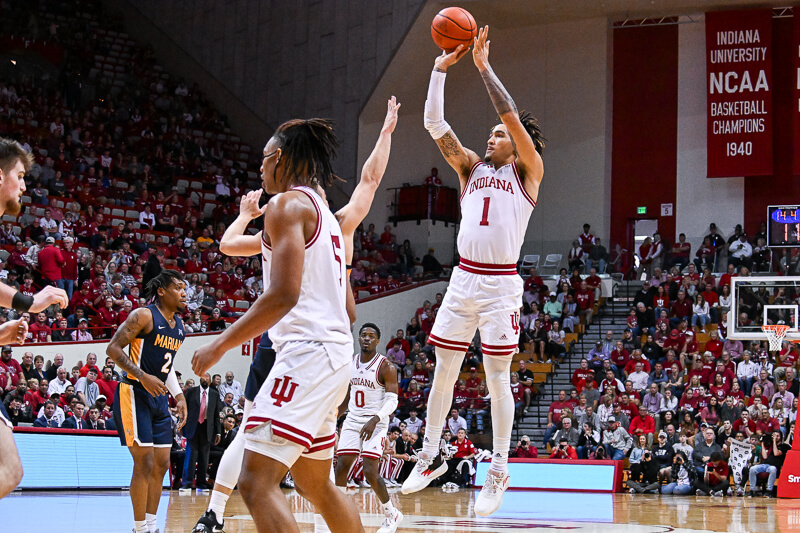 Thoughts on the 78-42 win against the Knights:

Prognosticators favored Indiana to win the league this year based on how the team looked on paper. With so many returning punts, plenty of key player experience and the Big Ten’s best defense ready to go again, it was a safe bet when going up against a Big Ten high on turnover and little short on top talent.

But there was also this: Indiana had two freshmen in Malik Reneau and Jalen Hood-Schifin who could help tip the scales even more in its favor if they live up to expectations. It’s early for sure. Marian is not Kansas, or North Carolina, or Illinois or Michigan State. We have much bigger tests ahead of us. Still, Reneau and Hood-Schifino stole the show this afternoon and you couldn’t help but notice.

With Trayce Jackson-Davis out as a precaution, Reneau started in his place and looked like his body double early. He established position on the right block, patiently moved and scored with his left hand after entering the lane. But Reneau has proven he can do more on the court than just mimic his fellow lefty’s back-to-the-basket game. The Monteverde product scored on a pick-and-roll after receiving a nice pocket pass from Hood-Schiffin. He took the ball up the field, went past a defender on the left wing and drove all the way to the cup for the score. Reneau caught a pass from Race Thompson for a dunk.

Reneau scored 14 points on 7-of-10 shooting and grabbed 11 rebounds. Not a bad debut for a freshman.

Hood-Schifino had two tough turnovers in the first half, but he certainly showed why some feel he could be a one-and-done player. He hit an incredibly difficult layup going away from the free throw line, where he was fouled and made a free throw to boot. He drove to the basket and scored. He ran the show at point guard for periods of the contest en route to 11 points and four assists.

“He’s playing like a vet a little bit … He’s been playing like he’s been in college for a while,” Jordan Geronimo said after the contest.

Simply put: Reneau and Hood-Schifino didn’t look like they were playing in their first college game today. Neither did fellow freshman CJ Gunn. Standout Lawrence North drained two 3-pointers and played good defense, looking confident during his time on the floor.

There has also been talk of Logan Duncomb’s improved play this offseason. He delivered this afternoon. Like Reneau, her friend recorded a double-double (11 points, 11 rebounds). It wasn’t always pretty, but Duncomb was productive and instilled more confidence. He looked like he belonged.

Thompson’s 3-point shooting looked strong today. He made 3-of-4. Xavier Johnson had a memorable afternoon (2 of 11). Jordan Geronimo had a nice stretch in the second half where he hit a 3-pointer and then drove down the right wing to score in the hole. Indiana shot 8 of 19 from 3-point range (42.1 percent), and its defense remains solid and engaged.

The Hoosiers took care of business this afternoon. But how the rotation shakes out with so many guys battling for minutes remains to be seen.

Submitted to: Knights of Marian University

Atmospheric river brings heavy rain, snow and wind to the US Northwest

Democrats are worried about an unlikely battleground: New York

Elon Musk is said to have ordered job cuts at Twitter